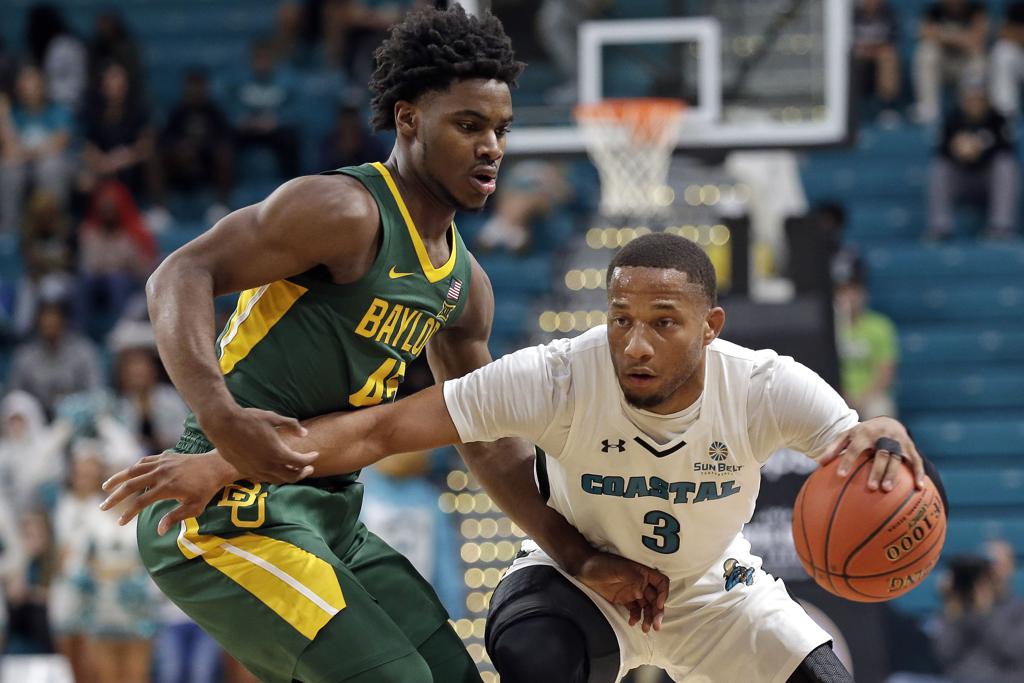 With the 2021 NBA Draft out of the way, there’s no better time than now to begin looking forward to next year’s college basketball season. In this article, and most that I publish on SportsTalk2319 this offseason, I’ll discuss some of my favorite players I evaluated last season that will be returning to college.

Some have transferred, some will be taking on larger roles, and some are overlooked guys that may become legitimate professional prospects with some improvements to their game.

I will start off this series with four guys that I really enjoyed watching last season.

Check out this video for clips of each player.

89th percentile in total offense (1.046 points per possession) per Synergy. 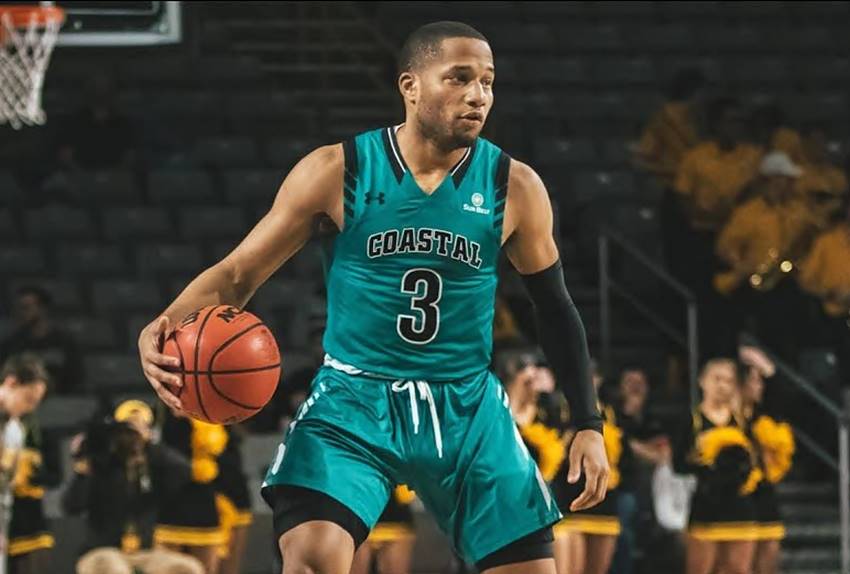 Coastal Carolina combo-guard DeVante’ Jones had a chance to go pro. He had a good first day of 5v5 action at the G-League Elite Camp, scoring 15 points (5-of-8 from the field) to go along with five rebounds and two assists. He had a +13 plus/minus in 19 minutes of action.

He only put up four points in 18 minutes in the second game of the camp, but still tallied five rebounds and three assists.

Ultimately, Jones decided to return to school and honor his commitment to The University of Michigan via the transfer portal, where he’ll get to spend a year fine-tuning his skills in the Big Ten under Juwan Howard. He told the Detroit News, “I’m a man of my word so I stuck to that. Coming back with a great group of guys trying to win a national championship, that sounded like a no-brainer to me. I couldn’t pass up that opportunity.”

His assists per game dipped from 5.7 in 2019-20 to 2.88 last season, but that was likely due to his increased scoring role for the Chanticleers. However, Jones was able to maintain his efficiency despite the increase in shot attempts, and even increased his 3PT percentage from 29% on 3.9 attempts to 37% on 5.3 attempts.

Jones is an efficient three-level scorer that can get to the basket and finish with either hand, knock down from outside off the bounce or catch, or hit from the lane with a nice runner. He compliments his scoring prowess with great vision and tough-pass ability. His assist numbers are certainly not indicative of his ability to set up his teammates with open looks.

Defensively, Jones is a quick and smart off-ball defender that understands rotations and plays passing lanes well. As mentioned, he was third in the NCAA in steals per game.  His frame may limit the number of positions he can guard, but his quickness, IQ, and rebounding ability more than make up for it.

The tough-as-nails Jones should be a perfect fit in the physical Big Ten. The experience of playing in a great Michigan system and the exposure he’ll get on the national stage should help increase his stock amongst NBA front offices that are already well-aware of him. Don’t be surprised if you hear his name called during next year’s draft. 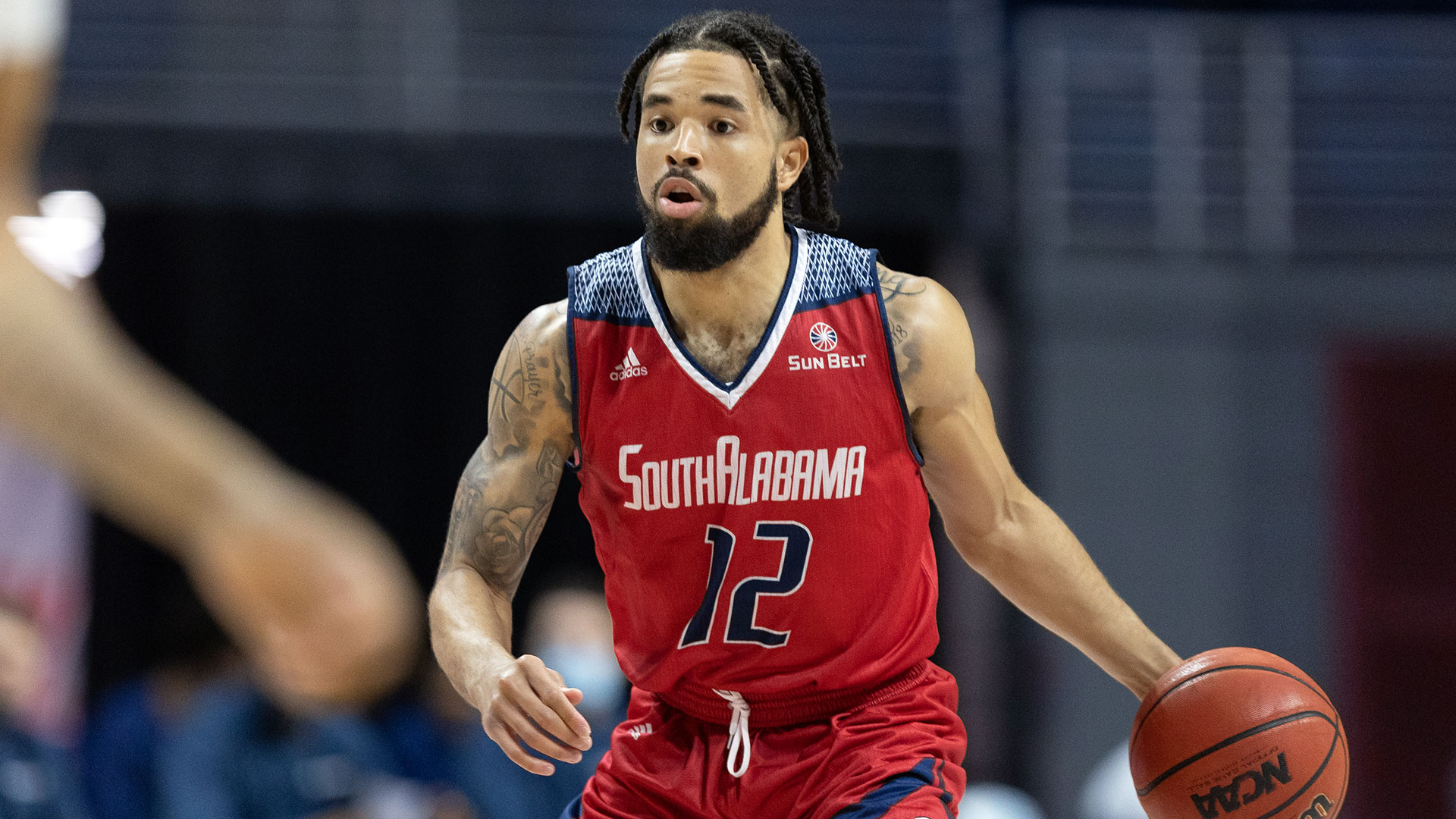 Flowers, the 15th leading scorer in the nation last season, is headed to Washington State after a successful senior year at South Alabama. His 588 total points were the fourth-most scored in the NCAA in 2020-21.

The 6’1” combo-guard is a tremendous jump shooter. He shot an efficient 38 percent from beyond the arc on 8.11 attempts last year, but he can do a lot of damage from within the perimeter as well. According to Synergy, Flowers hit 46.6% of his jumpers from inside 17 feet and 51.3% between 17 feet and the three-point line (77th and 90th percentile, respectively).

He possesses the ability to stop-and-pop, shooting 42.1% off the dribble (88th percentile according to Synergy), and was above average off the catch, knocking down 38 percent of his catch-and-shoot opportunities.

To compliment his shooting proficiency, Flowers could benefit from an improved ability to finish at the basket.  He’s a below-the-rim finisher that tends to shy away from contact, which causes some wild, off-balanced attempts. Also, while he has flashed a quick first-step, Flowers didn’t consistently create for himself with athleticism or handles, instead using a mix of screens and cuts to get himself open.

Improving his finishing and ball-handling abilities will really help him apply more pressure to defenses and will open things up for his teammates. He’s a capable passer and does a nice job navigating the defense as a pick-and-roll ball-handler, but right now he projects as a secondary or even tertiary playmaker at the pro-level due to that lack of burst and slightly below-average handles.

Defensively, Flowers is a hard-working perimeter defender. He’s active, tough, and unafraid, constantly making hustle plays and diving for loose balls. He’s relatively strong despite a thin frame, and he understands his role.  He’s not necessarily a versatile defender in terms of guarding multiple positions, but he isn’t a liability either.

It will be interesting to see how his game develops in a Washington State offensive system that allows guards the freedom to be creative and make plays (check out this great article from Jeff Nusser at SBNation’s Cougcenter for more on that) but Flowers’ high-level shooting ability alone makes him an intriguing prospect.

He’ll be a pro if he chooses, but playing a season in a major conference should really show scouts where Flowers projects at the next level. 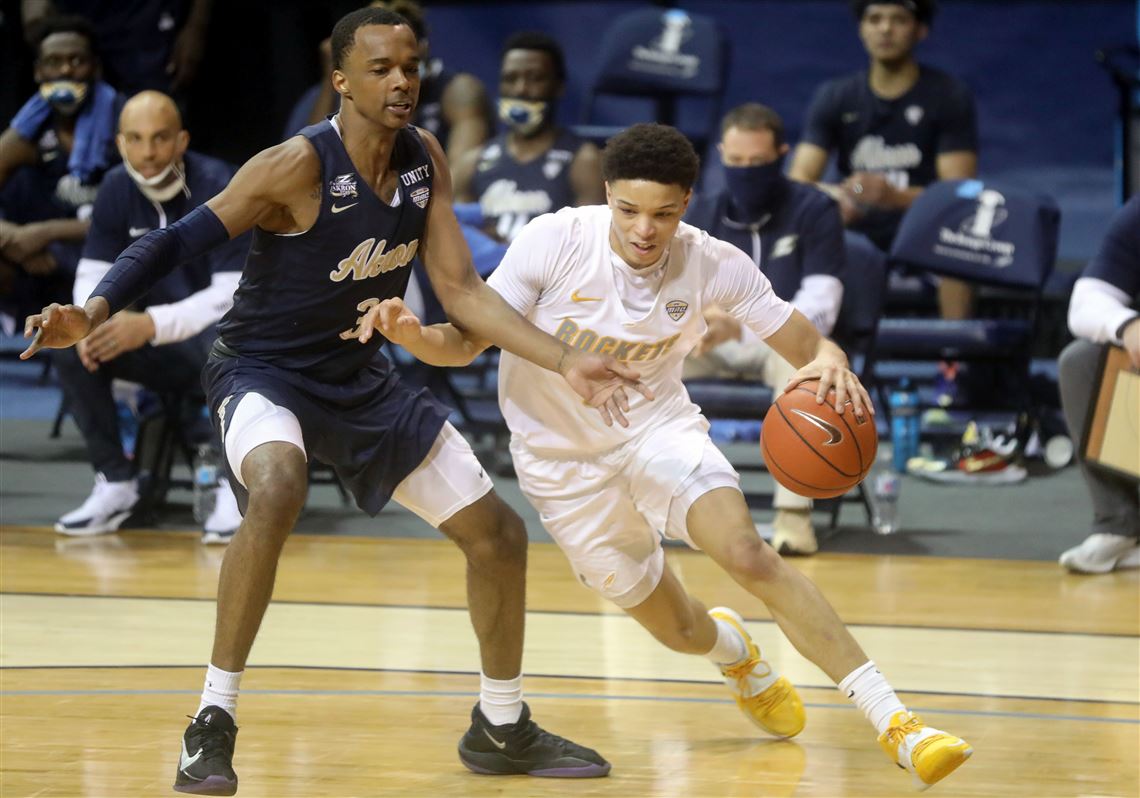 The 2020-21 Toledo Rockets’ backcourt was stacked.

They had Marreon Jackson, the MAC Player-of-the-Year who did the bulk of the scoring and playmaking for the Rockets (18 PPG, 5.9 APG).  He’ll be spending his extra year of eligibility manning the Arizona State backcourt next season.

There was also All-MAC Second-Team sharpshooter Spencer Littleson, who made 47% of his seven 3PA per game, the highest percentage amongst all players with that many attempts. Littleson graduated and will be a very, very solid contributor at the pro-level somewhere next season.

With those two gone, there is no question the Rockets will see an increased role for 6-4 combo-guard Ryan Rollins, whose solid rookie campaign earned him the MAC Freshman-of-the-Year award last season.

Rollins was the perfect complement to Jackson and Littleson.  He was a great secondary playmaker with an advanced ability to navigate the pick-and-roll as a scorer and a passer.  He cooled off toward the end of the season, but flashed the ability to shoot from deep off the catch or bounce, and he can finish consistently on either side of the rim (71st percentile on attempts around the rim, per Synergy).

To go along with the offensive tools, Rollins is a formidable defender with great hustle and energy. He grabs rebounds, dives for loose balls, and has the length and quickness to defend 1v1 on the perimeter.

There are certainly some areas where Rollins could use more consistency, including making quicker reads, knocking down shots in the mid-range, and becoming more comfortable playing at a higher speed, but he flashed the ability to do all those things last season and I’m eager to see what an increased role will do for his development.

Keep Rollins on your radar. 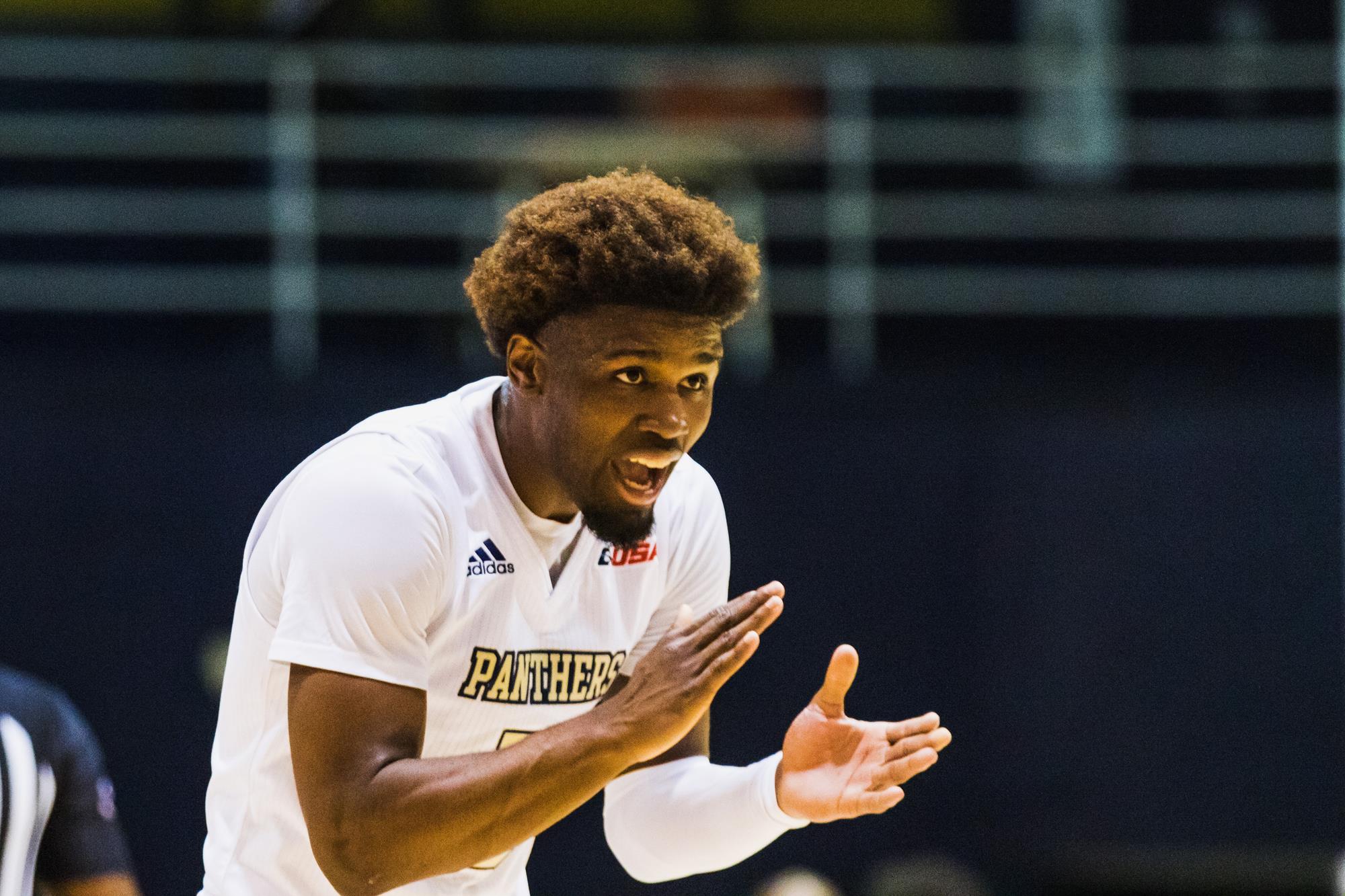 It is perplexing that Antonio Daye Jr. didn’t end up on a single All-Conference USA Team last season.

Daye was one of the quickest mid-major point guards I evaluated in ‘20-‘21.  He can get into the lane with ease, using a mix of speed and tight handles to break down defenses at will.  Daye is also a great playmaker that can make smooth, quick, accurate passes with either hand.

In terms of scoring, most of Daye’s attempts last season (48.7% per Synergy) came at the rim, where he finished 55% of the time. He isn’t tall, but he’s very strong and adept at finishing through contact.

According to Synergy, Daye ranks as an average jump shooter overall (37th percentile), but a good shooter off the dribble (63rd percentile), which is an aid to his pick-and-roll efficiency as it forces on-ball defenders over screens and puts pressure on the help.

Defensively, Daye uses his mix of strength, hustle, and athleticism to bully the offense into mistakes. He was 13th in the country in steals-per-game last season and ranked in the 97th percentile (Synergy) as an isolation defender.  He may not be the tallest or longest defender, but his effort is unmatched.

In order to round out his game, Daye needs to focus on limiting turnovers and improving the consistency of his jumper from all spots on the floor.  Additionally, if he can develop a consistent floater/runner, he’s going to be even more deadly once he gets into the lane.

Despite some of these needs, however, there is no question Daye will be a bully in the Bronx when he takes the court for Fordham next season.  The Atlantic 10 is always packed with great guards, and Daye could very well be one of the conference’s best in 2021-22.