How Immanuel Quickley and the Knicks Can Help Each Other

As the NBA’s playoff race heats up, an unexpected team is sitting in the No. 6 spot: the New York Knicks. A major contributor to the team’s surprising success this season has been rookie spark plug point guard, Immanuel Quickley.

The former Kentucky guard has exceeded expectations placed upon him by many, averaging 12.5 points per game in his first year in the NBA. While Quickley’s efficiency is a highly debated topic, he has emerged as a floor-spacer and shot-creator for a team that desperately needed one.

After going scoreless in Wednesday night’s loss to the Minnesota Timberwolves, Quickley snapped a nine-game scoring streak with at least 10 points. During that stretch, he averaged 15 points per game on 39.5% shooting. Despite that, “IQ” finished with a +11 mark in the plus-minus category. It was a testament to his ability to impact the game without even making a shot. He makes the Knicks a more dangerous team, but there are ways for both sides to help each other even more. 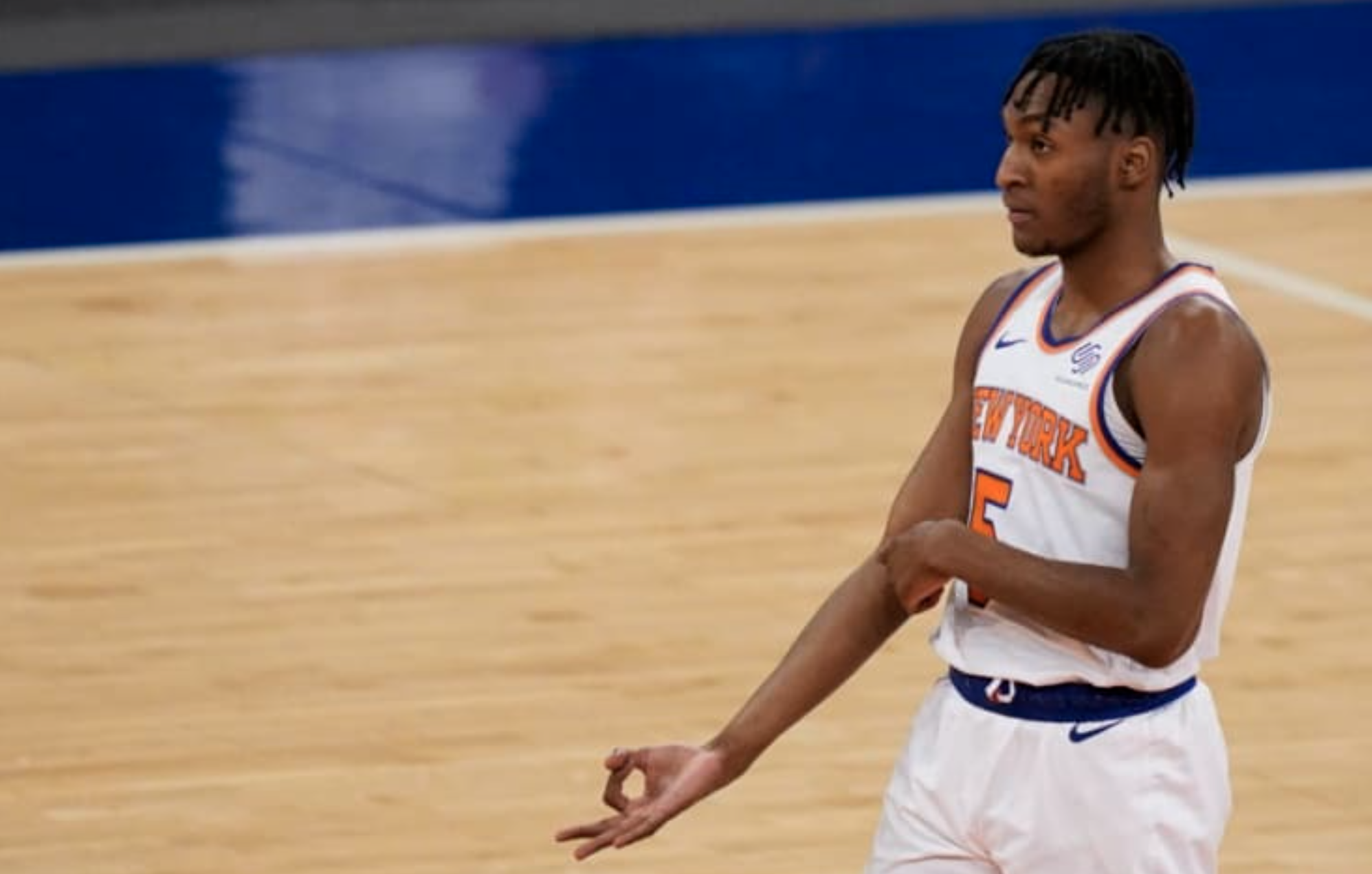 First and foremost, let’s address Quickley’s patented floater. The rookie has fallen in love with the shot and is making it 43% of the time in a variety of forms (drives, draw-backs, bank shots, etc.). Despite being listed at 6-foot-3, Quickley has a 6-foot-9 wingspan that allows him to get the floater off over taller defenders. It’s a legitimate offering that will come in handy throughout his career.

On non-floater shots inside the arc, Quickley struggles. He has the handle and length to create his own looks in tightly contested situations, but he’s a 35.7% mid-range shooter and shoots just 37.9% on pull-up jumpers in general. This pull-up deficiency also shows in Quickley’s shot profile from deep. He’s a phenomenal catch-and-shoot threat (43.8% on threes) and that number falls all the way to 32.4% on pull-up attempts. There’s one more shooting stat that jumps off the page, though.

Free throws are a legitimate strong suit for Quickley, where he cans 89% of his attempts at the line. He takes 3.1 trips per game, which is a decent amount for a rookie guard. In order to improve his overall efficiency, minimizing pull-up jumpers would make a big difference. If he isn’t attempting a three, Quickley should be probing the defense and trying a floater or attacking the rim in an effort to draw fouls. That’s where the pick-and-roll (PNR) game comes into play.

Statistically speaking, Quickley has been arguably the Knicks’ best PNR ball handler this season. In 5.7 possessions per game, the 21-year-old is averaging 0.98 points per possession and boasts the second-highest PNR free throw rate on the team. This may not seem like a big deal, as Quickley is in just the 77th percentile on a league-wide scale. With that said, he’s been New York’s most efficient option.

Quickley and All-Star Julius Randle have developed great chemistry. With center Mitchell Robinson sidelined due to a fracture in his foot, Randle is possibly going to be asked to operate more in the PNR. If he’s running it with Quickley, good things will happen. That’s the final way the Knicks can help their young guard.

The threat of Quickley’s floater is always there. Getting him downhill more often should be a goal, and he’s shown numerous times that he’s willing to do so when coming off of screens. Randle’s range has expanded throughout his career and he’s a reliable three-point threat now. He’s also a slithery, swift and powerful finisher at the rim. Decision-making has been a question mark for Quickley thus far. What better way to help him improve that on the fly than giving him great choices to make?

Putting the ball in Quickley’s hands more often isn’t a problem if the Knicks go about it the right way. Leaving him on an island to create his own looks is not the way to go. Putting him in situations where he can be aggressive in attacking the rim and making quick PNR decisions with a trusted teammate is. Getting him open looks from deep when playing off-ball would be the icing on the cake.

The importance of efficiency and improvement cannot be understated in today’s NBA. Immanuel Quickley has burst onto the scene as an exciting young player. His isolation looks are things of beauty and his floater game is serious. There’s room for more, though, and the process is simple: get Immanuel Quickley open, get him going downhill or get him reacting instead of thinking. The rest will figure itself out. It may be best for both him and the Knicks in the long run.

All statistics are from NBA Advanced Stats, unless otherwise noted.