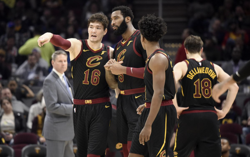 The Cleveland Cavaliers just swept the mighty Brooklyn Nets, the offensive juggernaut that averages the most points per game in the NBA (119.8) and boasts the leagues fourth highest offensive rating at 115.3.

Folks have responded saying the Nets need time to gel, or even claiming Kyrie, Durant, and Harden won’t be successful together at all as if none of them have ever had success playing alongside other all-star caliber players.

However, while some of those statements could turn out to be true, overlooked is the fact that the Nets just played two games in a row against one of the NBA’s top-5 defenses.

Yes, they played last night without Durant. No, it doesn’t matter.

The Cavaliers have been incredibly consistent on the defensive end. In eight victories this season, the Cavs have given up an average of 106.6 PPG. Take out two double-overtime victories where opponents scored 119 and 135, and that average drops to 100.8 in a league where teams average 111.3 PPG.

Casual NBA fans were shocked Wednesday night when the Cavs beat the Nets, 147-135, in the debut of Brooklyn’s new big-three. It was a game in which those casual fans tuning in should have been alerted to the defensive efficiency the Cavs have shown all season, but that defense was understandably overshadowed by a stunning 42-point outburst by Collin Sexton.

Fans certainly don’t tune into games to see grit-and-grind defensive battles ending with sub-100 point scores, but I’m here to tell you that this Cavs defense is for real and it is going to keep them in a lot of games this season.

The Cavs currently rank fourth in opponent points per game (106.6) and third in defensive rating (106.9).  Their defensive success come from a combination of things, but most notably their work rate which can really only be measured by watching the game rather than looking at stats. Nearly every single player on the Cavs roster has bought into the core values coach JB Bickerstaff has preached since day one, most notably hard work, hustle, and competitiveness.

The Cavs are fighting through and blowing up nearly every ball screen, fighting over the top and riding ball handlers all the way to the rack, where Andre Drummond, JaVale McGee, and now Jarrett Allen are waiting like the Queen’s Guard to protect the rim.

Numbers back this up, by the way. Cavs opponents are shooting 30.3% of their shots at the rim (4th most in the league) but converting a league low 58.8% of those shots (basketball-reference.com).

McGee and Allen are 11th and 16th in the NBA, respectively, with 3.1 and 2.9 blocks per 100 possessions while Drummond is 28th at 2.2. Those block numbers are nice, but the rate at which the Cavs’ centers are altering shots inside has been crucial to their success.

Speaking of Drummond, a guy that Cleveland fans seem foolishly eager to trade, he’s first in the NBA in defensive win shares (1.1) and 6th in the league in defensive rating (98). This is undoubtedly due to his length and defensive IQ. Outside of his rim protection, he’s shown an incredible ability to defend the pick and roll this season, using his length to simultaneously stop the ball handler from getting a good look off the screen and/or dumping it off to the roll man.

McGee has also been good in the same respect, and Allen shouldn’t be much different as he gets settled in.

It should be mentioned that McGee hasn’t played since Allen joined the Cavs Wednesday. He could be on the trade block, but for now it’s nice that the Cavs have some depth and security in the post.

It’s hard to believe we’ve gotten this far into an article on the Cavs defense without mentioning the most crucial cog in the Cavs’ defensive machine, Larry Nance Jr.  Nance is 7th in the league in defensive win shares and has logged the most steals per game (2.4) in the NBA.  He’s deceivingly quick in 1v1 situations and his defensive awareness is off the charts.  He always seems to be in the right spot and shows tremendous effort in all situations.

The Cavs couldn’t do it without effort from everyone, though. The aforementioned “buy-in” from every player on the roster is really impressive in a league where guys often take breaks and/or check-out on the defensive end.  Instead of standing around and watching, Cavs off-ball defenders are seemingly always engaged, stunting at players coming off screens, jamming cutters, filling lanes, and closing out on shooters incredibly hard. These are all fundamental elements of a good defense, but the Cavs are doing them efficiently and consistently.

See my video breakdown for a visual on some of these concepts.

The Cavs offense is still a work in progress. They have the third worst offensive rating in the league (104.6) and score the second fewest points per game (104.3).

To be fair, Sexton and Garland have rarely been healthy at the same time and Kevin Porter Jr. hasn’t played, and obviously won’t, for the Cavs at all this season. Sexton has been a great scorer, Cedi Osman has turned in some nice offensive performances, and Drummond’s 18.8 points and 4.2 offensive rebounds per game (2nd in the league) have been a nice boost, but the Cavs could really use some offensive help.

They have surplus of centers and some nice young pieces and draft picks to put together a package for someone like Bradley Beal or Ben Simmons if they are desperate, but those scenarios, and whether or not they’re even interested in making a trade like that, are up for debate and those discussions are probably better saved for another day.

At the current rate it’s hard to tell where the .500 Cavs will be at the end of the season. As mentioned, the defense should keep them in games, but if they can improve their offensive efficiency by even a few points they should be able to compete for at least a play-in spot in an Eastern Conference where a .500 record has gotten teams into the playoffs eight of the last 10 years.